The following article is an effort to provide all mourners and lovers of Imam Hossein (AS) [the third Infallible Imam of Shia Muslims] with an analysis, even a minor one, of a truly laudable artwork which has been created by an Iranian artist; a work of art which makes it easier for us to look at everything from an artistic viewpoint and live an artistic life in the school of Imam Hossein (AS).

The painting known as “The Evening of Ashura,” has been created by the world-famous Iranian painter, Mahmoud Farshchian, in 1976. The name of the artwork gives good indication of the time period that it covers: the evening of the day of Ashura (the day Imam Hossein (AS) and his disciples were martyred in Karbala by their enemies). The audience is not supposed to experience something new in this work because while being aware of the incident that it depicts and what happened around it, they are waiting to see how the artist is going to relate to the feeling of pain that has already afflicted the audience as a result of what happened in Karbala. Revisiting part of that incident in this work, while being a tribute to and emphasis on the wrongs done to the women and daughters of Imam Hossein (AS), represents an expression of deep sorrow which will assuage the suffering of the audience. 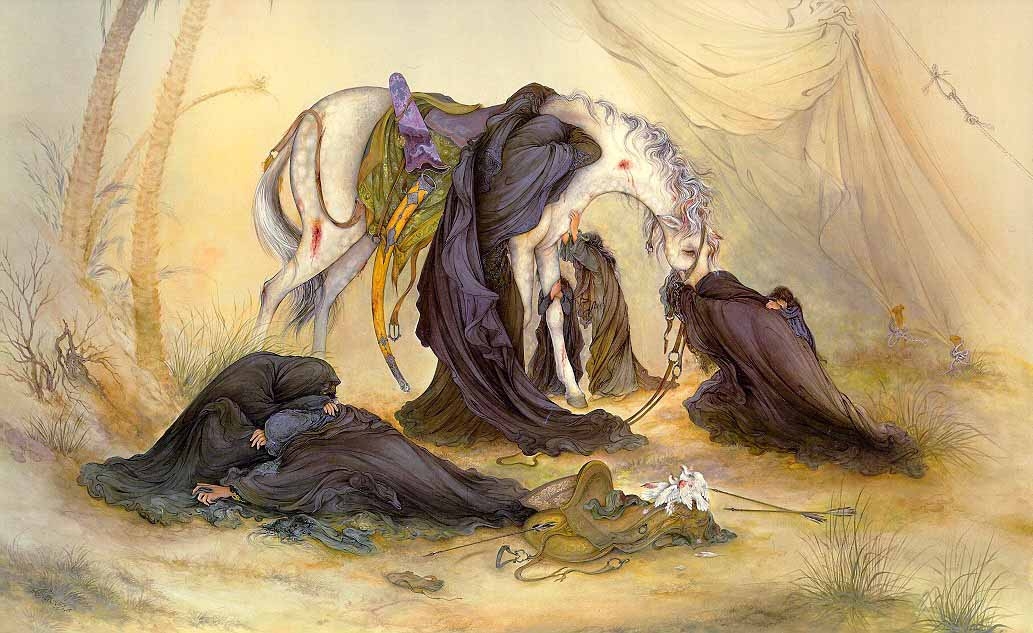 This painting is, in fact, a narration, which without any direct reference to past events, reflects their aftermath and enlightens us about the incident, which has led to this general picture. Therefore, the painting is about the present tense and we are waiting for what is going to happen now.

We see women and young girls who, out of the battlefield and unseen by those who are not their next of kin, are crying their hearts out at the feet of the war horse which is back from the battle without bringing its rider back. The saddle is disheveled while the reins are set loose with pigeons hit by arrows falling on the saddle. A woman is standing by and is leaning against the body of the horse, which is similar to a strong wall. While putting her head on the horse’s body, she has snatched the upper part of the harness and is crying. The woman is, in fact, located at the center of the circle.

Although the painter has pulled the drapes aside and has taken us into the tent, he does not allow himself and us to clearly see the sad and tear-covered faces of those who are in there.

This is why a set distance has been observed between the viewer and personalities in the painting. However, the main result of covering this sacred act [that is, crying over the wrongs done to Imam Hossein (AS)] is reminding the viewer of the sanctity of that moment and total absence of pretence in a mourning, which is actually an act of worship. 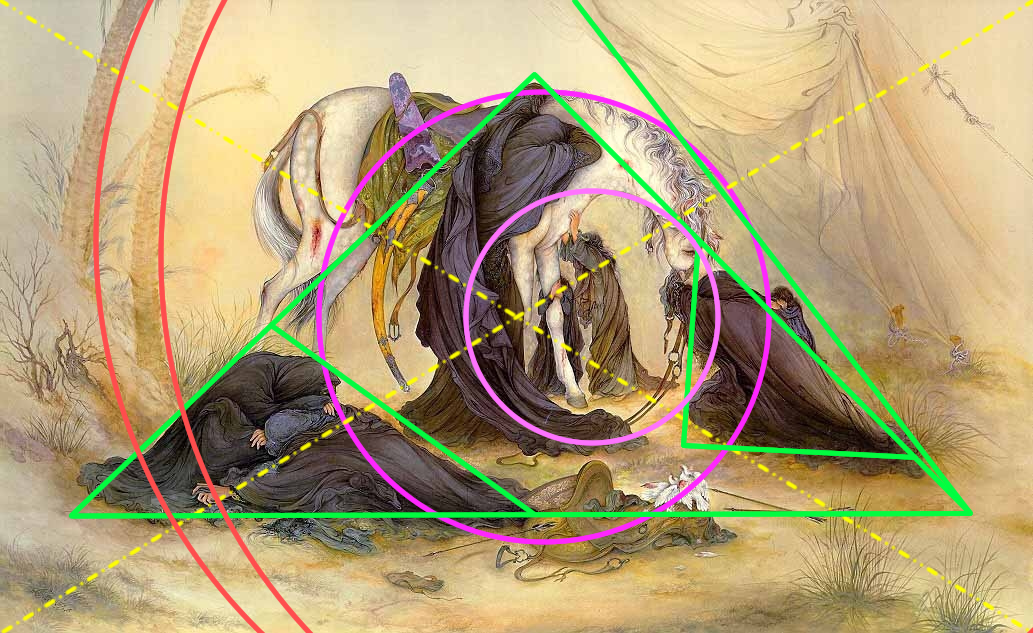 The interesting point, however, is that the painter has used such an eloquent combination in drawing the bodies of women and girl as well as their unseen faces that their silent wailing can be even heard with a little amount of attention.

It is only the small and delicate hands of children and women, which are visible on the side of their bodies that are draped in purple-colored chadors, and this is also an innuendo to the profoundness of their oppression.

The bodies of women are bent under the heavy burden of the sufferings of the past as well as due to the pain they are under as a result of having lost Imam Hossein (AS) and his disciples. The same depression and bent posture can be seen in the body and the eyes of the horse. Everybody is crying on this calamity. It is a form of crying which has been handed down to all the followers of Imam Hossein (AS) as a lasting legacy.

Another element, which is present in this incident, is the earth and what grows in it. The fact that they are dry and worn-out has not barred them from accompanying Ahl-ul-Beit (the progeny of Prophet Mohammad (PBUH)) in their sorrow. The dominant lines are like an arch all over the work; the arches can be seen in the bodies of women and girls, in the body of Imam Hossein’s (AS) horse, as well as in the land and the grass and the date palms. All of them are bent around the pivot of the incident which is Imam Hossein (AS) who is absent from the picture. In his place, his sister Zeinab (AS) is seen at the center of the circle.

The disturbed lines among the horse’s mane as well as its half-closed eyes with blood-covered injuries caused by the enemies’ arrows, are telltale signs of tremendous fatigue and the extreme pain which it is suffering from, as if, it is only meant to be there for women and girls to lean upon its body: it is destined to dies standing.

The lines present in the work, which start on the ground and climb up to the upper end of the palm trees within the frame of the picture, all form a semicircle the other half of which is situated outside the frame, as if, in an unseen and heavenly world. The curtain hung at the entrance of the tent, part of which is vague and another part has been drawn with soft and fading lines, puts more emphasis on this half-material and half-spiritual sense of the environment.

The knots on the tent ropes over prominent and strong nails, which have been driven deep into the ground, as well as the ascending form of the tent lines toward the upper edge of the frame and its hidden parts, are all harbingers of a heavenly journey, which is endeavoring to take everything that we see on the ground aloft. Therefore, movement is indispensable part of the work.

The composition of colors in “The Evening of Ashura” painting follows suit with the style of using colors in traditional Iranian painting by using soft colors, which do not create any inappropriate combination. Even when the color of the women’s and the girl’s chadors are considered with more care, unlike what is usual, they are seen in such colors as purple (which has a more spiritual hue) and grey instead of black. The only places where a tinge of black is visible are in the folds of the women’s chadors and some shady parts of the painting.

The colors are limitless, which means that every color has been employed with all its hues in the same work of painting. This has been among consistent features of most paintings done by Master Farshchian, which has also received due artistic attention from him in this work.

The color of the bodies of humans present in the framework are in conflict with and different from other components of the painting. However, the lines and postures of their bodies create great coordination and conformity with other elements.

The color of gold on the sheath of Imam Hossein’s (AS) sword and those surfaces where objects and bodies contact the earth, have imparted artistic beauty to the whole painting because such points have turned into origins of light and illumination and attract the viewers’ attention. The combination of white and yellow on the body of the horse and innocent-looking pigeons differentiates them from other objects. At the same time, the bloody sores on their bodies induce the viewer with a sense of sympathy due to the violence they have gone through and serve as an omen for the absence of the rider and owner of the horse as a result of a bloody and unequal war.

The light seen in the painting, once more, follows suit with traditional style of Iranian painting, and is present and pervasive in all the aspects of the work. Light is an indispensable part of this spiritual atmosphere the final result of which is martyrdom and steadfastness against difficulties. The “light” is both present and looking on. It exposes unseen aspects of the scene because the brush of the painter in its movements has made it a pervasive presence throughout the painting in order to allow us stand in front of it and watch the beauties of martyrdom and resistance.

The painting, “The Evening of Ashura,” depicts the change of reality at the hands of truth. In view of the details of this calamity, the artistic way of expression employed by Farshchian is similar to a poetical requiem, which makes standing and musing both easy and impossible. You can neither stay there and watch, nor are able to pass over and ignore it. The shame that the viewer feels is no less than the shame of the horse that has returned from the battlefield without its rider.