The paintings of Iran Daroudi are special to her. They are embedded with feminine characteristics while being overflowed with experiences of failure and triumph, which certainly end in hope. All her works, both in form and content, have a special label and sign, which is, in fact, the painter’s signature and substantiates her artistic capabilities.
Most works painted by Daroudi have common points and characteristics and the viewer, who is familiar with her art, can easily know the creator of her works wherever they see one of this artist’s works.
In this article, I will try to select a few out of the heap of this artist’s paintings to analyze them and share an artistic pleasure with the readers.
In most of her paintings, especially in these few selected works, the painter depicts open spaces which both have perspective and enjoy an infinite milieu, which has been forcefully limited within the framework of the painting canvas. This limited frame can be better seen through careful inspection of the margins and observation of the continuity of the lines. As if Iran Daroudi is able and wishes to choose a canvas as wide as the sky and the Earth and move her brush without any stop and stasis in order to paint an entire world.
Although every painting has its own special subject, the form of her works has been revealed in a way that it tells us this is the entire world, and the sole thought-provoking and noteworthy subject is the same thing that is seen at the center of the work.

More interestingly, the centric position of the subjects is depicted at a place where the sky and the Earth meet and has connected two material and immaterial, and in other words, finite and infinite spheres. The focal and central point of her works gives out a light, which breaks through the cover of life and divides the two aforesaid worlds in order to be revealed.
This light, when accompanied with any theme or subject, is a possible hope on which not only the painter has set her sights, but becomes the sole haven and recourse which is able to move onto the background of the work and ultimately into the mind and spirit of the viewer and penetrate deep into their soul.
With Daroudi’s paintings, the look of the audience moves from the whole to individual parts and then back from individual parts to the whole. One can clearly claim that her paintings train us and educate us in how to take in all aspects of her works. This characteristic has been made possible through the totality of colors and the flow of each color like a flowing stream in the context of the canvas. Therefore, “movement” can be considered as one of the most obvious characteristics of her works. 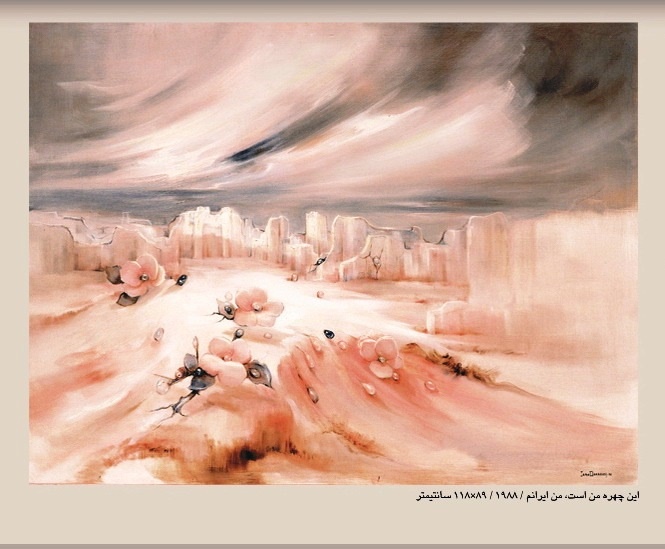 The movement of colors is rebellious, of course, not in such a way as to induce the sense of an irregular and excited unrest. On the contrary, the excitement of movement in colors is oriented toward an ideal end, which incorporates departure and union all at the same time. The painter does not want her and her audience to experience immotility and death. Even in the painting, The Last Passage, the light breaks through and explodes, but not merely for the purpose of a desperate disruption, but to delineate and work out an emancipating path. This is because in Daroudi’s works, there is no room for an inescapable end based on annihilation. Death, per se, is a living world and even more powerful than burdensome and tiring forms of life. 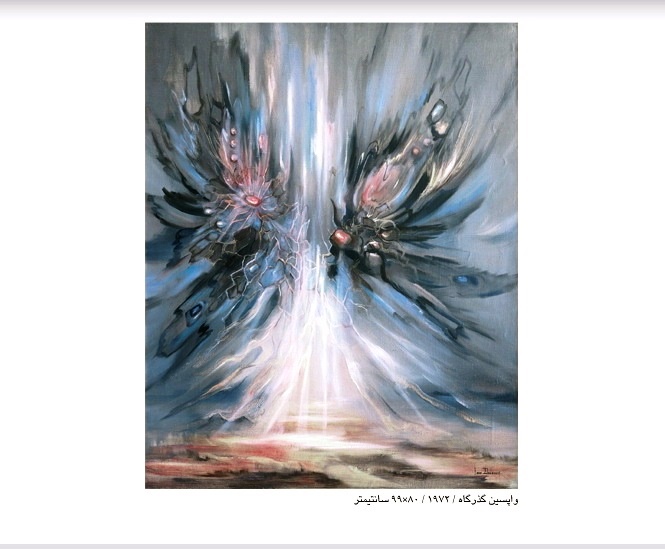 The colors used by Daroudi are a combination of cold and warm colors and are accompanies with a feeling vacillating between kindness and strength. The kindness that flows in her paintings emanates from such delicate colors as white, cream, sky blue, turquoise, orange, grey and so forth, while the strength comes from sharp and warm colors, which are both dynamic and stimulating. Wherever the intensity of a color is increased and its contrast is more striking compared to other colors, that work talks to you. It gives out a high and lofty word as wide as the sky and the Earth, like the painting, Steadfastness. 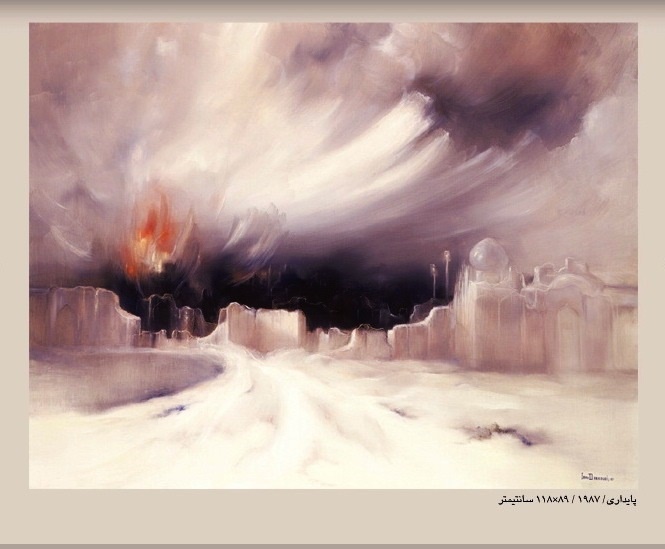 An anywhere the contrast of all colors creates a balanced ratio in harmony with one another, they reflect no word and sound better than the sound of silence and assurance. This issue has imparted such a delicacy to, for example, the painting dubbed This Is My Face, I Am Iran, or the painting dubbed Everlasting Marriage, which any up and down in it can unintentionally cause a failure, which can then heap scorn on the one who is responsible for this failure. 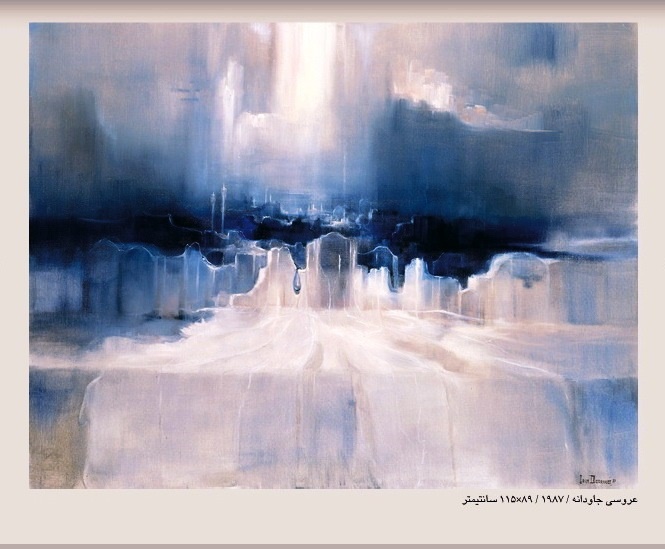 The subject of flower in most paintings by this artist includes flowers that are more prominent and more powerful than their stems and leaves. Her flowers grow on any surface, be it land and water and the sky. Although they have given a sense of delicacy and softness and good growth to her paintings, they are also so powerful that they have grown and are vivid under the most difficult of conditions and give the promise of life and beautiful growth to desperate critics. Most flowers are in the foreground and dominate the entirety of the work. Regardless of the direction in which the world moves and any bitterness and hardship it may bring to us, the “flower,” which is a symbol of femininity, will remain eternal and promising. 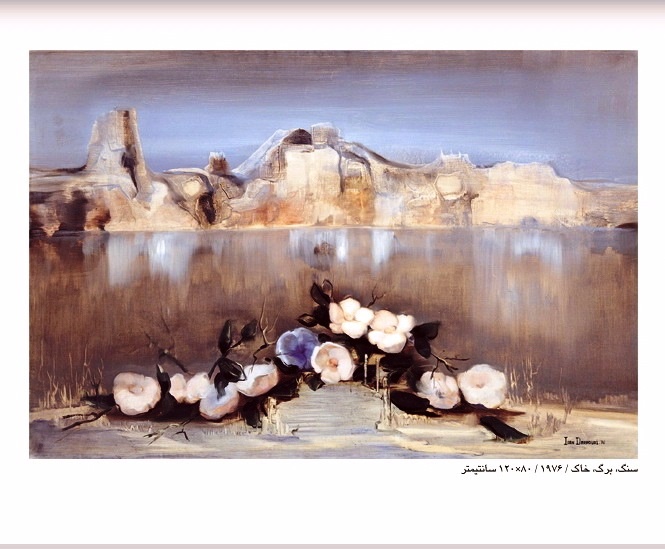 Iran Daroudi, the lady of color and light, has made “permanence” under any conditions the dominant feature of the soul and spirit of the art of painting. In her creations, unlimited and unrestricted “hope” seems sharp and beautiful and promises a utopian and idealistic destiny. At an age of 79, more than any other woman and man, she has a very rich experience which is artistically reflected in her art. Her soul is present, not in words, but in color and light. Our gaze can search for footprints that magical hands of this woman have left on the painting canvas and have been then lost in the blowing winds of time. Perhaps, at any juncture of time, the sharpness and accuracy of our trained gaze will raise hope and possibility of getting past many layers of colors in order to find a sign of the feeling and thought of this artisan woman on her canvases. 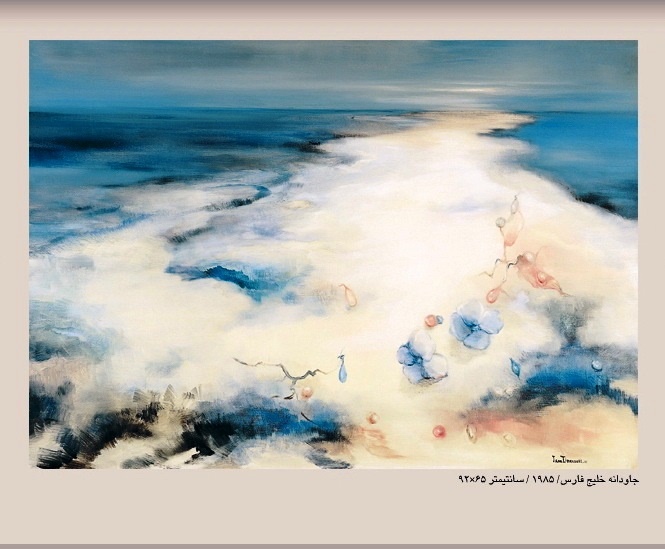