Name of work: Madonna with Saints and Members of the Pesaro Family (1519-26)

The painting is installed at the altar of Basilica dei Frari, Venice, Italy

Analysis of form in important works in the history of painting art is a requisite for understanding and command of this art. Due to the general approach and sometimes under the influence of the prevalent penchant for fashion, most contemporary students and artists pay less attention to classic fundaments of the painting art when they start their studies in universities and official education centers as well as the private art education centers, and mostly focus on modern and even postmodern schools of painting. Continuation of such conditions in the long term will deal serious blows to knowledge of artists of the principles and rules of painting and other visual arts that are influenced by it. Mere imitation and production of works that rarely communicate with the audience is a result of less attention that is paid to this issue.

The present article is just an example, which tries to analyze the geometrical form in a work belonging to a busy and capable artist of the High Renaissance period. Taking a spiritual approach to this work and analysis of its various themes, which can be also derived from the analysis of its form, is left to erudite readers who are well versed about the visual arts. 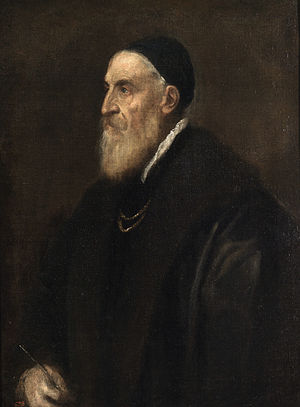 The time of the creation of this work was the High Renaissance period, that is, a time of the climax of creativities in the 15th and 16th centuries. Before Tiziano, there were other artists and art giants like De Vinci, Raphael, and Michelangelo, who created unparalleled works of art. Tiziano, however, with an eye to the past and banking on his own overflowing flair and talent for creativity and new inventions, presented the world of art with a new style, so that, he stood on almost the same par as Michelangelo and was nicknamed “The Sun Amidst Small Stars.”

He was an artist who built his artworks on the basis of the Christian themes in addition to subjects borrowed from the Greek and Roman mythology. After living for 88 years, he died in 1576.

Tiziano was born in Venice and has left behind 68 works of painting. He did not tolerate clichés and avoided crisscross positioning of bodies and looked at various subjects from a diagonal angle. By shattering mediocre symmetries of the Renaissance period, he used a new form of balance, which can be traced in the work that we are discussing here.

The art in the Renaissance and classic times was marked with a unique characteristic, which is unfortunately taken less importantly by contemporary artists. That characteristic is comprised of techniques that are based on geometrical and mathematical calculations that affected all kinds of artwork ranging from architecture and sculpture to painting. De Vinci, as an unparalleled genius, employed both art and science (mathematics and geometry) simultaneously in his works. This technique had been accepted by artists of that time as an unavoidable principle. Tiziano, for his part, made the most of this background and created lasting works which are known as good examples for the future generations.

Analysis of the work

In addition to the main theme of the painting “Madonna with Saints and Members of the Pesaro Family,” which is giving a Turkish captive as gift to the Madonna (which is not the subject of discussion here), there are also technique and form in this work, which are educational for students of visual arts, especially those interested in painting.

Before this work, symmetrical balance was considered as an inviolable principle. Here, however, we see asymmetrical balance created through use of the red color in the Madonna’s clothes, which is also the color of the flag that is carried by the winners of war, thus, creating the balance that the painter meant to show.

The light shining on the whole environment is a heavenly light, which comes from the sky. The Madonna and the Jesus have the lion’s share of this light. The naked body of the child in the mother’s arms and the face of the Madonna, wrapped in a white robe, reflect a great deal of the light. Quite close to it is the red color of the Madonna’s clothes, which in addition to the green color used in the architecture, gives special warmth to what is around them.

There are two huge stone columns made of polished stone in this painting, which rise up to the sky and greatly contribute to depiction of a strong environment and highlight the material strength of this space. Interesting point is that the Madonna has leaned against one of these columns, which is a supporting factor and a strong and permanent backing. No other person in the painting is worthy enough to be leaning against the second column.

In addition, this painting is made up of numerous hypothetical triangles, which have been used with total care and cunning to shape the general outline of the work. The triangles play the role of pyramids which add to the strength of the theme of this work. Renaissance artists owed this technique to ancient Egyptian architecture. As we see in the painting, the first triangle consists of the angels that are located at the top of the work whose base is formed by the Madonna and the Jesus and the flag of the winners of war. Other triangles include the Madonna and saints and the Pesaro family, and the triangle that encompasses the flag, the victor of war, and the Ottoman captive. By focusing on the lower circle, we can see two smaller hypothetical circles, which reveal the geometrical order and strength and position of the characters in a better way. As if the artist has carefully engineered similar and different statuses and positions in a visual and intangible way through this configuration.

Unlike previous paintings, here, the Madonna and the Jesus have not been put in the foreground due to their value and credit. They have been placed in the background of the work and using an intangible, pyramidal and ascending perspective, have been put at the highest point of the worldly part of the work compared to other characters. The base of this pyramid is a platform which is attached to the earth and gets smaller as it approaches the apex of the pyramid. This situation not only does nothing to reduce sanctity of the Madonna, but also uses a number of other visual elements such as the maximum light, the lofty position, a rock-like support, and her up-to-down way of looking, to demonstrate the high position of her and her child as a result of which they seem to be less accessible and more heavenly.

On the whole, in addition to reliance on his artistic creativities and reflection of the themes ordered to him, an artist like Tiziano tries through his artistic cunning to depict the idea in which he believes and has faith. In this way, a creative artwork uses a well-calculated and accurate form to enrich the content and provide the audience with visual pleasure while inducing them with a spiritual theme.